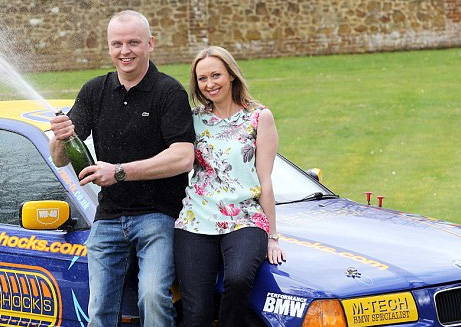 Trotter went from car mechanic and racing driver to multimillionaire overnight when he won the staggering amount on Friday. He is now the 745th wealthiest person in the UK and the first in the country to win the Euromillions jackpot this year.

Beforehand he had told his colleagues that he was sure he was going to win and that "this time tomorrow" he would be rich.

Now, he told The Telegraph, it would be "rude not to retire" from the repair garage he runs in Mitcham, called Chameleon Coachworks. He plans to buy a car and a new home with stables for his horse riding partner Nicky Ottaway. The pair have quit their jobs, are planning a holiday and Trotter is looking forward to following his passion for British tour car racing.

Both Ottaway and Trotter's father were in disbelief when Trotter broke the news, telling him to stop being an "idiot". Even with the winning ticket as proof, the extraordinary news took a while to sink in.

Trotter said: "Apparently I turned white as a sheet and couldn't sit still, I kept walking round the house ̶ I didn't know what to do with myself.

"I've always thought I'd win big and I'd had a good feeling all week. I had a funny feeling I had to play the lottery. I just knew I had to do it, so I stopped on the way to work and brought Â£10 of Lucky Dip.

"It's been really, really hard graft for 15 years. Now this has happened it would be rude not to retire."