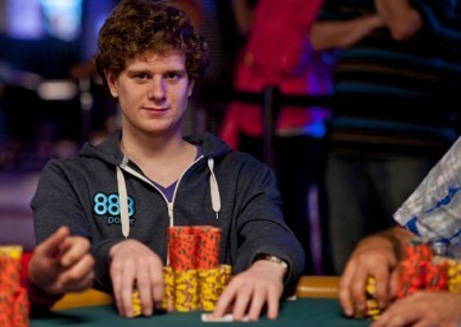 Holden, who in 2011 finished the WSOP Main Event - poker's most renowned tournament - in ninth place to earn a tidy $782,115, has decided to "semi retire" from poker to embrace his "inner geek" with a three-year philosophy degree at the University of Kent.

He wrote on his blog: "I've spent four incredible years playing poker full time and I never dreamt my favourite card game could give me so many opportunities and experiences. Being able to travel the world, record television programs, meet people and enjoy some of the best restaurants and clubs, all while earning money playing a game, is not a privilege lost on me. More recently though I have lost a lot of drive to play poker, especially in live tournaments.

"Although I enjoyed playing from time to time, I was not finding it fulfilling and began to realise that I should look into some new challenges to motivate me."

After earning his first degree Holden said he "fell into" poker ̶ an accidental career that, according to PocketFives.com, earned him over $800,000 in online tournaments alone. As well as his position as a November Niner, he has scored two other big prizes on the live tournament circuit, including during his second run at the WSOP Main Event in 2012 where he came 55th.

However his estimated earnings of $1.2m did not all go on the fancy clubs, bars and hotels typical of the high rolling poker player's lifestyle. Inspired by altruism, he started to use his talent to have "a large positive impact on the world" and has made charitable donations that he is "very proud of".

But with nagging fears he could do more in a different profession, an appreciation of the "simple things in life" and a disillusionment with the "Vegas-lifestyle culture of financial competitiveness" he decided to use his financial head start to start afresh.

Holden said he was also becoming aware the competition is increasingly fierce and the market always "vulnerable to reasonably sudden changes from legislation or economic swings", and as such he was glad to be able to both play and leave professional poker on his "own terms".

He said that while he still intends to play every now and again, he's looking to find something that will give him greater "security" and "fulfilment". He thinks he could continue with academia once he finishes his degree, but is also attracted to working with a charity or pressure group that he supports.

Holden concluded: "I'll still play a bit online and the odd live tournament, hopefully ticking over enough money to pay a few bills. I do still enjoy the game, and throughout my career I've been lucky enough to only have to play when I want to. This has had the added bonus of ensuring that I play closer to my best.

Â"I don't want this to change, this is why it's time to move on, to tackle some new challenges and continue to enjoy this great game as a hobby for the rest of my life."