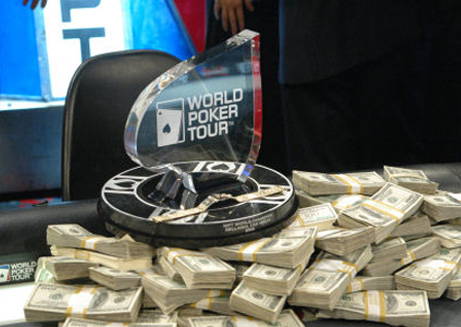 Of the 328 entrants to the WPT World Championship, it was Keven Stammen who emerged victorious at the Borgata Casino in New Jersey on Saturday night.

The American, nicknamed Stammdogg, won $1.35m, the biggest prize of his career. Afterwards, he said: "I've never felt this good before. I can't believe I did it."

The final table was a strong and experienced one, consisting of Stammen, Abe Korotki, Byron Kaverman, Tony Dunst, Ryan D'Angelo and Curt Kohlberg.

Korotki went out first, going all-in with A-7 and losing out to D'angelo's A-J.

Following Korotki's exit, nobody was lost for a considerable amount of time as a succession of players doubled through.

On the 100th hand, Kaverman doubled through Kohlberg leaving his opponent very low on chips. Two hands later Kohlberg, who calls himself the 'psycho ninja', went all in with K-J against Kaverman's pocket sixes. Kohlberg got his Jack on the flop but a six on the turn finished him off.

Five hands later, Dunst doubled through D'Angelo. With few chips left, D'Angelo went all in on the next hand with 9-5. After careful consideration, Kaverman called on the big blind with Q-2. Neither got any cards from the board and D'Angelo was eliminated.

Shortly afterwards, Stammen got lucky as Dunst went all-in against him. Dunst's A-2 would have beaten Stammen's K-6 more times than not but it was Stammen's night. One King on the flop and one on the turn ensured that Dunst was eliminated and Stammen and Kaverman went heads-up.

Afterwards, Stammen said that Kaverman was "the one guy I would like to go head-to-head with as we are both from Ohio and have been buddies forever".

Soon afterwards, Kaverman went all in pre-flop for 3,155,000 and Stammen called rapidly. Kaverman's pair of fours faced off against Stammen's A-8. The flop and turn went by without event and Kaverman remained in the lead with his pair of fours. Stammen got lucky again on the final card, receiving an Ace to finish the tournament and make him a millionaire.