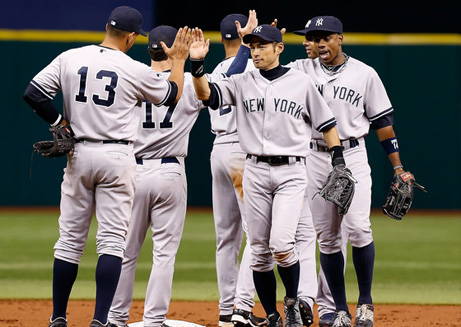 The New York Yankees and their imported ace face the surging Toronto Blue Jays in the Bronx tonight.

But nobody, least of all the Yankees, could have expected him to be leading the majors with ten wins less than halfway through his rookie season.

But a scheduling quirk means Tanaka has still only faced one team twice in his nascent major league career.

In his second outing against the Chicago Cubs he was handed his only loss of the season, giving up four runs (three earned) in a 6-1 rout.

Sharp baseball bettors everywhere held their breath; was this game indicative of teams catching up to a mysterious pitcher the second time they saw him?

Toronto certainly have the bats to make that blip a trend, leading the majors in home runs with 92.

"They're a very good lineup, whether you see them the first time, the fifth time," said Yankees manager Joe Girardi. "They're extremely dangerous so, yeah, I'm looking forward to it. My thought is he [Tanaka] is going to do fine. I wouldn't think that he wouldn't. But obviously you're curious."

Tanaka is priced even higher than his previous outings (he was a 5/8 favourite last time out), meaning savvy bettors will be running to the counter to oppose him.

The wild card could be Toronto rookie starter Marcus Stroman, whose ERA is a wince-inducing 5.71 thanks to some shaky relief work early in the season.

However since being moved into the starting rotation he has logged three quality starts in three attempts for an ERA of 2.5.

Baseball, more than almost any other sport, is defined by its randomness and competitive balance ̶ even the worst team will beat the best three or four times out of ten.

In this matchup the Yankees and their shiny new ace are media darlings, so the value is all on the Blue Jay bats and their rookie pitcher.