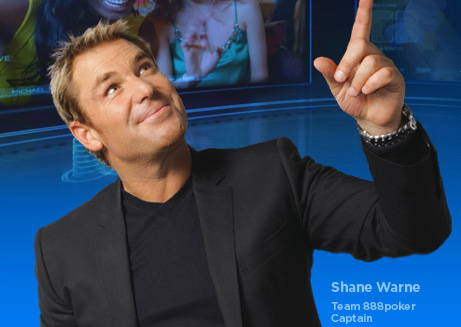 Former cricketer Shane Warne has ended his partnership with operator 888poker, the online poker brand of 888.

The Australian, who claimed 1,003 international wickets, confirmed via his Twitter page that his co-operation with 888, which began in 2008, has come to an end, while also announcing that he plans to continue playing on the professional poker tour.

Â"FYI I still want to play on the pro poker tour & keep improving ! Really enjoyed the last 7 years with 888 but time to move on !!!!Â"

Warne has participated as captain of Team 888poker at various poker events and has appeared on its TV advertisements as part of the partnership.

The end of the partnership makes Warne the latest sports star to part company with 888poker, following the termination of Uruguayan footballer Luis SuarezÂ' deal with the operator last year, after being given a four-month ban from football for biting ItalyÂ's Giorgio Chiellini at the FIFA World Cup in Brazil.