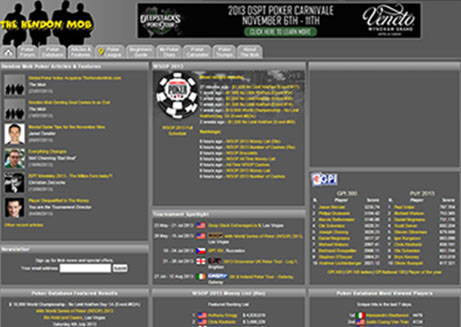 The hugely successful Hendon Mob website, which stores a database on hundreds of thousands of poker playersÂ' live tournament records has been acquired by the Global Poker Index. The site, widely acknowledged as the most complete of its kind in the world was run by the UK based Hendon Mob Limited, which has now been bought out the GPI, which among other things ranks the top 300 live tournament poker players in the world.

In the twelve years since its inception the Hendon Mob has built up tournament information on over 250,000 players and 70,000 events. It was originally founded by the quartet of Koe Beevers, Ross Boatman, Ram Vaswani and recent WSOP bracelet winner Barney Boatman.

In a recent press release, the GPI outline plans to continue to invest and develop the Hendon Mob website and the information it provides. It also outlines a will to expand to a broader range of information and also to provide even faster coverage of tournament results.

Global Poker Index CEO Alexandre Dreyfus said: Â"The Hendon Mob poker database is the best in the world, without a doubt. We plan to support and grow this tremendous asset. The Hendon Mob and the Global Poker Index are a natural fit to put together. As a combined company, they truly form an authoritative hub for all poker players, particularly those who compete in live events.Â"

Barny Boatman said: Â"With the expertise, resources and commitment of the Global Poker Index, the legacy of The Hendon Mob is safe and its future is secure.Â"